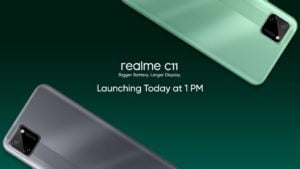 Realme today launched it’s entry level smartphone the C11 in India at 7,499 along with 10000 mAh Power bank with 30 watts fast-charging capability at 1999 via an online only event. The Realme C11 is the successor of Realme C3. The design is a step-up from it’s predecessor with a squared back camera module. The Realme C11 has relatively smaller sized-bezels compared to the C3 but has a thick chin at the bottom. The Realme C11 comes in two colour options and one storage option. The phone runs on Realme UI on top of Android 10. Realme 6i with MediaTek Helio G90T launched in India from 12,999 onward